The heat is on in the debate over coconut oil. A fast-hitting food trend due to the presence of medium chain triglycerides (MCTs), which may aide in weight loss and have other beneficial properties related to cognitive function (not to mention coconut oil smells and tastes pretty good). The coconut oil craze has gone viral since 2011 when research associated MCT consumption with weight loss. Now the American Heart Association has released a presidential advisory about saturated fats, spurring headlines such as “Coconut is not Healthy. It has never been Healthy.”, and “Coconut Oil as Unhealthy as Butter and Beef Fat.”

Now, if you know me, you probably know that I’m on the Weston A. Price train of  “fats are not bad for us, nor do they make us fat”. I don’t drink milk often, but I did drink raw milk in both Chicago, Seattle, and a few times here in DC. I rarely purchase reduced-fat dairy products (sometimes they’re out of Fage Total!), and I disagree with the government that people should be opting for low fat dairy products. Dairy products are fortified with Vitamin D, which is a fat-soluble vitamin, so why drink skim milk? Why is orange juice fortified with Vitamin D?

Before I get off track…  Back to coconut oil. I began using coconut oil back in 2008 when a nutrition researcher friend from the gym told me that it was the best oil to use for cooking because it transfers heat more efficiently and has a higher smoke point. After using it a few times, I decided that the flavor was too strong to use for everything, so I went back to primarily using olive oil except in stir fries, where I quite enjoyed the olive oil taste. As the years have gone by my collection of oils has grown to include walnut, flaxseed, olive (virgin and extra virgin), canola (good for the cast iron pan), and coconut. And MCT, which I add to coffee, workout shakes or smoothies.

All this leads me to the question: where is the jury on the quality of the poly- and mono-unsaturated fats used? Vegetable oils vary greatly in their composition of omega fatty acids. These are essential fats that we must get from our diets because our bodies don’t make them. Glossing over omega-9s, we’ll focus on omega-6s and omega-3s.

The recommended ratio of omega-6’s to omega 3’s is about 4:1. Currently, the average ratio is something like 20:1! This disproportionate ratio has been linked to obesity, increased risk of heart disease, increased blood pressure, blood clots, and influences our bodies to retain water. According to the literature:

“Excessive amounts of omega-6 polyunsaturated fatty acids (PUFA) and a very high omega-6/omega-3 ratio, as is found in today’s Western diets, promote the pathogenesis of many diseases, including cardiovascular disease, cancer, and inflammatory and autoimmune diseases, whereas increased levels of omega-3 PUFA (a low omega-6/omega-3 ratio) exert suppressive effects.”

How the fats stack up, courtesy of the Canola Oil website.

The average American consumes a lot more omega-6s because… well, we are what we eat. When our livestock is fed corn and soybeans, the meat and milk produced contains omega-6s. Farmed fish are even fed these things, which is NOT NATURAL. Corn, safflower and soybean oil are also found in an extremely high percentage of processed foods. Potatoes or chicken fried in peanut oil = loads of omega-6s.

Looking at the chart posted above, we can see that coconut oil is:

So here’s what I suggest: 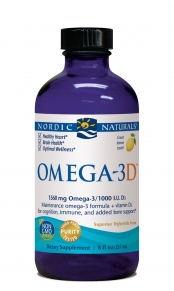 I’d like to close with the fact that coconut oil makes great toothpaste. Throw a little mint extract and baking soda in there and you’re good to go!

One thought on “Weighing in on Coconut Oil”