I spent eight days in Armenia, visiting my sister who is in the Peace Corps. I took a lot of pictures, and instead of writing multiple posts (which I had planned to do), I decided to spend more quality time with my sister and her wonderful Peace Corps Volunteer (PCV) friends. So, this is a long post.

Other Culture (a few pictures)

(for all pictures, visit my google pics album Armenia Photos or my Facebook page!)

Armenia is a Republic, a government of elected officials including a President and a Prime Minister. There are also 18 ministries in the Armenian government, focusing on everything from Healthcare and Foreign Affairs to Diaspora (Armenians no longer living in Armenia, or Armenians living in Armenia but who were not born there).

The biggest health challenges Armenia faces are directly related to nutrition and smoking. 26% of Armenians live in poverty and are affected by food insecurity. Much like what’s happening in America, malnutrition is wielding it’s double edged sword of both under-nourished children with stunted growth, and overweight children. 5.3% of children under 5 are low in weight for age while 16.8% of children under 5 are overweight. Alarmingly, healthcare costs were approximately  $485 million USD in 2014, up from around $295 million in 2006.

The Armenian Comprehensive Food Security, Vulnerability, and Nutrition Analysis report was created jointly by the United Nations World Food Programme, UNICEF, and the National Statistical Service of the Republic of Armenia and released in April of this year. These groups came together in 2014 to begin development of a strategy to address the various public health issues plaguing Armenia. Highlights of this report, which you can find here, include:

From the report… “The report conveys several key messages for decision and policy-makers: 1) education is critical for improved  food security; 2) a dual burden of malnutrition exists across the country among children under 5, with large numbers of both stunted and overweight children; 3) volatility in global and regional economies impedes Armenia’s economic growth, and 4) the majority of the country‘s population is at risk of one or more natural hazards.

The report suggests that with joint efforts and with a greater coordination among all stakeholders, it is possible to develop and implement comprehensive national food security (in its three dimensions – availability, access and utilization) and nutrition policy along a life-cycle approach, which will help address the current food insecurity and malnutrition in the country.

A Strategic Plan on Promoting Healthy Lifestyle, approved in 2014, aims to develop and introduce legislative and structural mechanisms to promote healthy lifestyles and reduce [chronic diseases]. The plan sets out the goal of a 7 percent reduction in overweight and obesity by 2020. A related National Program on Combating Most Prevalent [chronic diseases] 2016–2020 addresses the main risk factors of smoking, alcohol, blood pressure and obesity.”

UNICEF and the United Nations World Food Programme are working with the government to combat these issues by increasing knowledge of the dangers of malnutrition, the importance of a well rounded diet and physical activity.

Also of issue: school food, or the lack thereof. Currently there is no school feeding program in place by the government and, from my survey of students in Nor Hachn (discussed below), many school aged kids go all day with out eating. The World Food Programme is advocating for a school feeding program, kind of like the National School Lunch Program in America, to address the issues of malnutrition via food insecurity by ensuring children are offered meals away from home. back to top

Nowadays, Armenians don’t eat breakfast and they think we’re weirdos when we ask for it… Breakfast might be coffee and cigarettes. This is even true for children! When I spent a day with my sister at her school in Nor Hachn (we visited grades 8 – 11), I asked the students if they eat breakfast, and if so what are they eating?

Dinner is the largest meal of the day for almost everyone, and can consist of:

Khinkali and Khachapuri (pictured below) are popular Georgian dishes… There are few traditional Armenian dishes served at restaurants, at least in Yerevan from what I saw. Much of the Mediterranean cultural foods have become enmeshed here. Fattoush, tabbouleh and hummus are also popular.

Other Things About Armenia Culture 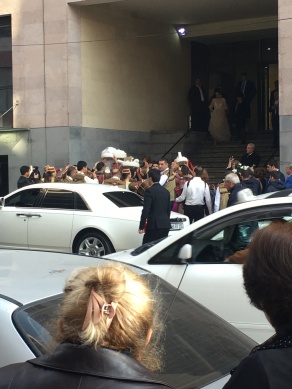 I spent a lot of time with awesome Peace Corps volunteers 🙂 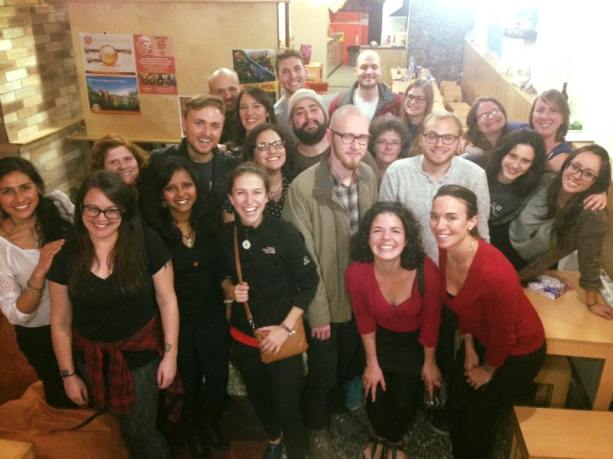 What I learned about the Peace Corps:

11/5 – I arrived at 5am to the hostel in Yerevan after spending a 14 hour layover wandering around the streets of Vienna and sleeping in an unbelievably uncomfortable chair in the airport. There was a woman sweeping the sidewalk of leaves across the street from the hostel. I mentioned to my sister, “It seems like a strange time of day to be sweeping the sidewalk.” She replied, “They will spend so much time sweeping up leaves, leaves on the sidewalk are unacceptable. But when it snows? Nothing. The NEVER shovel.” Slept until about 11am, then went to lunch and the Vernissage Market. 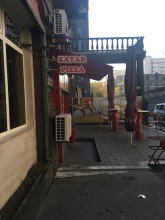 Our tray of “pizza”

Pizza here is just flat bread with spices, sometimes cheese, sometimes various vegetables. It is rolled up or folded in half, like a wrap or quesadilla. People with larger appetites would not be satisfied with just one…

11/6 – We enjoyed a lazy Sunday. After sleeping in, we met some friends for lunch then packed up and hung around the hostel. We had a beer at Dargett, a very American feeling brew pub that opened recently, before going back to Rachel’s apartment in Nor Hachn. The Marshrutka, a van used for public transportation, was never full in the roughly 30 minute ride. This was a nice surprise considering Rachel said she is often on the small bus with many other people, who stand squashed up against each other. We took a walk around Nor Hachn, then stopped at a “Bistro” to pick up something to take to Marie’s (another volunteer) as she was treating us to coffee. After a lovely time dining on cookies and strong Armenian coffee, we went to the produce market and picked up some things to make for dinner and lunch the next day. All of the produce and eggs pictured below cost less than $4 USD altogether!

11/7 – Oatmeal for breakfast at Rachel’s, then we went to school. Here, I learned much of what I wrote in the Food Culture section of this blog. It was a long 5 hour day, being interviewed by class after class and being “forced”to have cake and red wine at 10am. Haha. Before going back to Yerevan, we had lunch at Rachel’s. Once in Yerevan, we had dinner with some Peace Corps people and also ran into some Americans I had met on the plane!

11/8 – I woke up later than I have in a REALLY LONG TIME. I can’t even say how late. Okay okay… 2:30pm. I don’t think I’ve slept that late since… I can’t even remember. Definitely jetlag catching up to me. I then spent the day drinking coffee and walking around Yerevan taking pictures. I went by the opera house and the Cascades (pictures coming), which is a large staircase at the end of a park, all sprinkled with sculptures and artwork. I didn’t eat until dinner, when I made pasta with home-made meat sauce for my hostel friends.

11/9 – I got up early, 6:30am, to watch election coverage. During this 5 hour period, I had some bread, a hard boiled egg and lots of coffee at the hostel. Many PCVs were upset with the election results, so it was kind of a sad day. I met them for lunch at Mr Gyro (exactly what it sounds like… I had a chicken pita). We had beers at Dargett when they were done with their obligations, then stopped at Pit Stop (a local chain for all things chicken) for a chicken sandwich on the way back to the hostel.

11/10 – We had chili for lunch, which I made with beef, kidney beans, corn, tomatoes, peppers, cayenne, and red pepper seasoning.  After lunch, we took a nice long walk to the genocide museum… very sad. It’s kind of unbelievable that the whole world doesn’t really know about what happened there. We spent about three hours at the museum, then caught a cab back to the hostel. We had dinner with a few others at a Spanish Tapas restaurant called Come + Calle, where I’m almost positive the sangria we were served had no alcohol in it (and was rather expensive). After dinner, we went to a “on the down-low” LGBT party where men were free to wear make up and high heels and everyone had a great time dancing.

11/11 – Awoke in the morning, hung out the hostel until lunch time, when we had more chili. Rachel and I took another long walk then stopped for coffee on our way to the Peace Corps office. They have a tradition called “cookies”, where they serve cookies and thank the out-going volunteers for their service.  The celebrations continued into the evening back at the hostel, where Chef Lisa, another PCV, thanked her colleagues by making a huge dinner for about 25 people! We all, including me, went around the table and said something that we loved about Armenia and gave a compliment to the person on our right. To avoid after-dinner goodbyes and tears, Rachel, Daniel and I went to have some wine at Wine Time, which is much more adorable than it sounds and has a great wine selection.

11/12 – Rachel and I went to Khor Virap after having lunch at Schawarma. Khor Virap is a monastery built in 602 AD and usually has great views of Mount Ararat… It was a little hazy this day but in the pictures  you can see what it looked like when I was there versus some of the great shots Rachel has been lucky to capture. 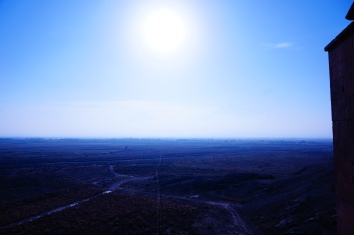 A slightly foggy day: you can’t see the mountains at all

Rachel’s view on a clear day

After getting home and showering, we headed to dinner at Ararat National Restaurant for a taste of traditional Armenian food: lavash, summer salad, lamb dolma, and Khorovatz! back to top

Dolma of grape leaves stuffed with lamb and rice 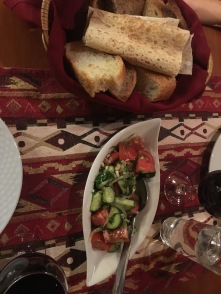